The Museum Next Door 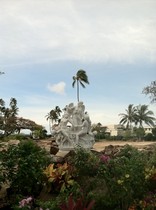 How would you like a statue garden next door?

Depends on if you like the statues I guess...But Kahala residents don't really have a choice these days as Japanese billionaire Gensiro Kawamoto is turning 5 oceanfront Kahala lots into his own personal statue garden.

The controversial billionaire, who owns several dozen homes in the neighborhood, has been under constant criticism for his handling of his properties. Located in one of the most coveted neighborhoods on Oahu, his Kahala homes are often found in various stages of dis-repair. Even now that he is making improvements on these 5 lots, with extensive landscaping and ____________ (insert your own adjective) statues, most residents in the area believe he is disturbing their community.

BUT is there anything the community can do about it? While some communities in Honolulu such as Waialae Nui & Waialae Iki have association rules regarding the outward appearance of the properties in those neighborhoods, no such regulations exist along Kahala Avenue. Mr. Kawamoto has bought his property fee simple and unrestricted by association bylaws, and at his discretion has decided to create his own personal statue garden.